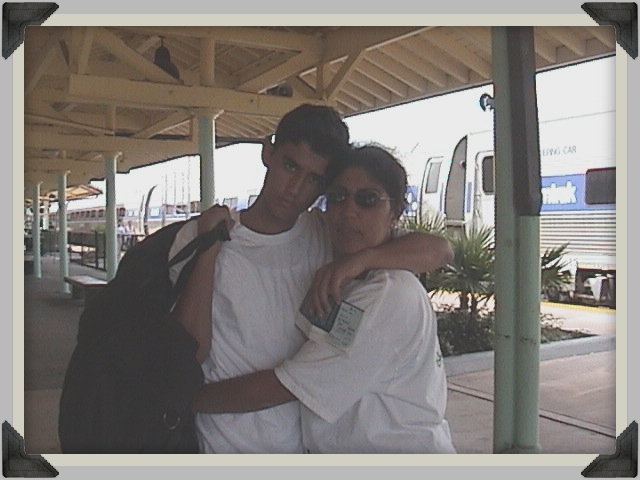 This picture was taken at the train station in Ft Lauderdale, FL.  It was the last time I was with James while he was alive.

I had rented a hotel by the beach in Ft Lauderdale.  We had a great time.  My cousins Jazel and Fidel kept the beat going with constant parties and lots of girl action on the beach.  My god-daughter Karina kept James busy stealing his food and keeping him up when he wanted to sleep.

James, now able to drive, got to take me all over Ft Lauderdale.  He had grown so much physically and emotionally and wanted to make a change in his life.  We talked a lot and we decided he would come back to Virginia as soon as I worked it out with the lawyers.

Two weeks later, he was gone…..

I know I should not put too much into things, but he had given me a hard time on coming to this outing.  I had purchased a train ticket for his travel and he was worried about it’s safety.

I’m not big on news, so I was not aware that not too long before there had been a bad train derailment somewhere in the mid-west.  Evidently a real bad accident and it had been all over the news.

James kept asking if I was trying to kill him, hoping I would change the venue or come pick him up.  I know is foolish, but how I keep thinking maybe if I had picked him up things would have ended out different…….